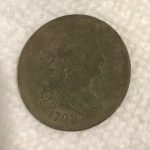 I haven’t posted much lately because I had an article published in the NOV/DEC issue of American Digger Magazine, and I figured that pretty much covered me in the writing department for most of the winter.

Another reason, is because its winter.  I hate winter. I hate being cold, and I don’t like to detect in the cold, so there’s not much to write about while I’m avoiding the cold. But…

I did get out  a few weeks ago with JoJo and Jimmy Teflon from my club, and I would have posted this a few weeks back, but I was waiting for JoJo to send me pics of his finds, and he still hasn’t, so you’ll have to use your imagination… 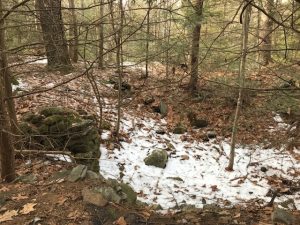 The site we went to was in northern CT, and I don’t think it had been hit before.  It was also a high altitude area, which all but shot to heck the temperature in the high 40’s vision that I had in my mind—It was friggin’ cold, and the ground was frozen solid in most areas, but I did brave that frigid day up in the Connecticut Alps.

Shortly after arriving at the site I found an old jackknife and thought maybe the soil wasn’t so difficult.  Then I moved to my left about 5 feet, got an awesome copper signal, and gosh darn it if I could not break through the ground to retrieve it.  Signal after signal, it was the same deal, and I couldn’t retrieve my targets.  It seemed as if Mother Nature was playing a cruel game with us, and it really was maddening.

Then JoJo found a copper, and I got very excited thinking maybe the ground wasn’t frozen everywhere, but then I saw the copper.  He had dug (hacked) it out of the frozen soil, and unbeknownst to him, it was on its side so it pinpointed off, and Wow—what a job his shovel did to that coin!  It wasn’t that bad though, because it was a pretty toasted 1812 Large cent, so it wasn’t like he ruined something great, and hey, it was still a copper.

The guys had both been hunting  the front of the cellar hole, while I hunted the back.  As they came around back, I headed out to the front where there were a lot of pine trees, and I thought the soil would be softer there.

Well, I thought wrong, the pine tree theory did not pan out.  I still couldn’t dig most of my signals, but all of the sudden I got one of those signals that’s so great you don’t even glance at your VDI because you just know it’s a copper—I love those signals. 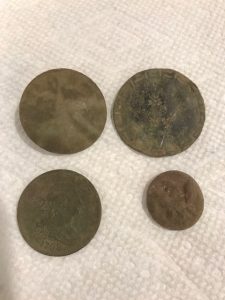 I prayed the I would be able to get to the target as I pinpointed it.  I began to dig, and ugh, it was frozen.  I was determined though.  I kept digging, and hacking away at the area, making a way larger than normal hole to avoid scratching what I was 100% sure was my copper.  It took a very long time; pinpointing, digging, scraping, digging, hacking, digging…  Then, there it was—I could see it!  But, it was frozen to the ground around it.  I decided to take a chance with the edge of my lesche to get it loose.  Thankfully, it popped out of the ground easier than I had expected, and wow, I could see it had a lot of detail.  It turned out to be a 1798 Large Cent, and I was super happy about the coin, but even happier that I didn’t destroy it.

I went on to find an Eagle button closer to the cellar hole, and my gridding produced two Dandy buttons, but I did end up scratching one of them, unfortunately.

Jimmy wasn’t having much luck, and our time was running out, so we decided to try another site which was nearby.  As soon as we got there, JoJo found an 1812 large cent in decent condition, right next to the cellar hole.  The ground seemed more frozen than the other site, and all I was able to dig out was a bullet, but Jimmy found a really nice crotal bell.

It was a cold day hunting in difficult ground, but at least we all came out of there with something. I’m certain that when this site is re-visited when the ground thaws, there are going to be some very happy detectorists walking out of the woods at the end of the day.