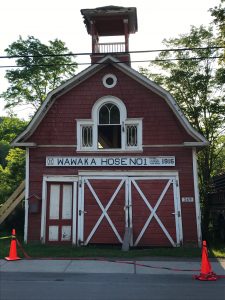 This past weekend was the Nor’easters Metal Detecting Club “Halcottsville Relic Quest” hunt, sponsored by the Historical Society of the town of Middletown, NY, and the Halcottsville Fire Dept., and held in the beautiful Catskill Mountains of Halcottsville, NY.

The event was held to raise money for the Middletown Historical Society, and to help restore the Halcottsville Fire Departments 1916 Hose House.  $2000.00 was raised to help them in their endeavor, and everyone had a great time along the way.

Halcottsville has got to be one of the most detectorist friendly towns I’ve ever visited.  It seemed as if most of the residents were participating in our hunt in one way or another, either by opening their yards up for detecting, or making some type of dish to be served at the hunt barbeque.

The people were super friendly, and we all felt very welcome.  One of the residents even said “If you need anything, or need to use the bathroom, just knock”.  It was so refreshing to be around such friendly folks, especially after some of the negative attitudes our hobby sometimes encounters.

I only got to spend one day at the hunt, which was a two day event, but I was not exactly sad to miss the second day because I attended my granddaughters first ballet recital instead, and hey, if you’re going to miss something special like that to go metal detecting, then you really need to get your priorities straight.

I also got to hear her call me “Oma” for the first time, so that was a major bonus.  And maybe I’m a dreamer, but I’m secretly hoping that someday she will ask “Oma” to buy her a metal detector…

Anyway, back to the hunt, which was great.  A majority of the residents who lived on the main street opened up their yards for detecting, and you could just walk down the street, basically going from one yard to the next.  Signs were posted and visible, and all participants had a map, which let you know what was off limits, but it kind of felt like you had the whole town to detect in.

I attended the hunt with my friend Jo Jo, and each of us had found tokens by the time we hit the end of the street.  I was in my glory as I pulled out my first Hard Times Token ever—and in good condition too.

The funny thing about it was that during the ride up we were discussing tokens, and I had mentioned that I had never found one of the old ones.  I guess that discussion sent out some mysterious request to the universe for me.

When we were done with the street, we stopped for some lunch then headed for the field.  We had wanted to start the hunt in the field, but the mad rush to get there by the CTX wielding hunters when the hunt started had us hanging back for a while.  We have E-tracs, and therefore suffer from CTX interference on our machines, and that interference is annoying enough that no one with an E-trac wants to hunt near anyone with a CTX.

When we got to the field, we were greeted by some of our fellow club members who showed us all the goodies they found.  A lot of great stuff came out of that field, but I suspected there would be more, so I started swinging.  My first target was a clad quarter.  I was like, well if they missed this signal, they had to have missed others.  Second signal half cent, third signal mercury dime, fourth signal ox knob, fifth signal spoon bowl… it was a great little run of finds, but after that all I pulled up was another clad quarter which I ended the day with.

We went back to the firehouse at dinner time, and got to look at all the finds, and I was blown away by the amount of stuff people found.

The barbeque was in full swing, and I have to say that those folks in Halcottsville sure do know how to cook—everything was delicious, and there was definitely no shortage of food (or dessert).  Yummy.

Even though I could only attend day one, I’m sure day two was just as successful and fun for everyone as the first day was.  I thought it was a great hunt, put on by a great bunch of people, so “Thank-you” Nor’easters Metal Detecting Club, The Middletown Historical Society and the people of Halcottsville.  It was a great time!

More pics below (hover for captions).

Comments (5) on “A Warm Welcome in Halcottsville”