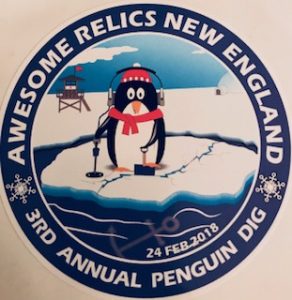 In only its third year, Awesome Relics New England’s Annual Penguin Dig is turning out to be the new favorite winter metal detecting event in New England.

It’s timing is perfect, the end of February, when most in the hobby are going stir crazy waiting for the ground to thaw.  And its held on the beach, where if the weather is mild, that just adds to the enjoyment of the day.

This year it was held on February 24th, at Scarborough Beach in Narragansett, Rhode Island, and myself, along with over 200 other eager detectorist’s were lucky enough to be able to attend and join in on the fun.

Its actually quite cool, and kind of fun to see the items people brought as their gifts.  You would think there wouldn’t be much variety, but I was really impressed with the creativity and thought some folks put into it. 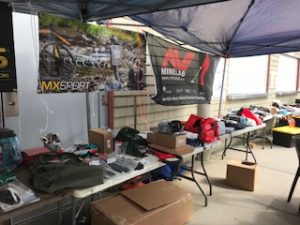 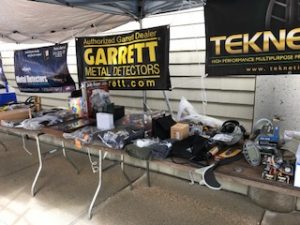 Some of the many gifts people brought

This year the beach was seeded with over 3,000 coins, relics, jewelry & miscellaneous items, and most, if not all, were donated by the detecting community. Some of the items found could be turned in for different gifts & giveaways at the end of the day, like hats, t-shirts, coins, gift certificates, etc…

The event was well sponsored.  I believe there were 10 manufacturers represented, all who donated prizes.  Participants were given raffle tickets upon entry, and they could deposit these tickets into the drawing for manufacturer’s and other gift packages. We were told that all the manufacturers who the organizers reached out to had made a donation to the hunt, so kudos and a big thank you to the manufacturers, because your donations helped to make the day all the more awesome!

The organizer of the event, Doug Bowden, did a great job, and I know there were many other people involved who were helping out also, so a big Thank-You to Doug, and everyone else who contributed in making this annual hunt the best yet.

Hope to see you all at next years Dig–more pics below: