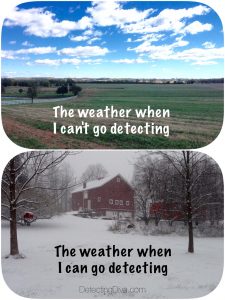 Ah, so it’s January, my least favorite month of the year, and February comes in a close second.  What makes these months worse, is that during the week, the weather gets mild and I get my hopes up.  I begin to think it might hold out until the weekend when I have the time to hunt, but nope, with the weekend comes another cold front or snow storm.  I’ve lived in New England long enough that I should be used to that by now, but I’m not. I’m still easily fooled by my delusion that Mother Nature won’t change her mind last minute. 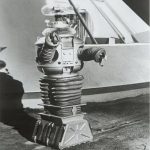 As usual around this time of year I’m in hibernation mode, and as my mother used to say “climbing the walls”, ’cause I can’t go detecting.  Oh sure, I could hit the beach looking like the robot from Lost in Space, teetering around the sand in 5 uncomfortable layers of clothing, while trying to swing my machine, and then becoming really annoyed when I realize I’ve run out of tissues, or can’t find my lip balm.  But seriously, enough already.  I’d rather sit inside being cranky from lackofdetectingitis (I assure you this is a real condition).

I did, however, get a slight reprieve last weekend and managed to get in a few hours of hunting. My guy was off to New London to work on car stuff, and offered to drop me off at a friends house, which was nearby there so I could detect.  Even though it was a very enticing offer I was like, “No I just want my blanket, but you have fun”.

I then watched 3 episodes of “The Man in the High Castle“, not because I like the show, but because I was too lazy to find the remote.  By the time that was over, the dog was doing her Potty Pace (back and forth in front of the fireplace–why there I don’t know, maybe so I can see her from the couch?), so I reluctantly put on my shoes, scarf, hat, gloves and coat, and went outside.

When I got outside, the sun was shining, and I thought, Wow-how odd is that?  Then the air hit my face, and OMG, it was warmer! I decided to walk the dog down to the barn, taking note of the ground on my way. It didn’t look frozen, and it didn’t feel frozen, but still, it was suspect.

So, with cautious optimism, I headed back to the house for my T-handle. I then walked around the property sticking it in the ground every 20 feet or so, to check for ground frozeness, adding in a few extra test slices to amuse the neighbors–I swear they think I’m a bit off, but, whatever.

The test was a success, the ground, surprisingly, was like butter. Major excitement took over as I raced inside to collect my gear, and get dressed (in 3 layers, just in case).

I didn’t have to go far, I didn’t want to. What I wanted was instant detecting gratification, so I hit the wooded parcel near the house. It’s an area I’ve hunted many times before, but I hadn’t been there since the end of summer.  I save it for those days when I want to detect, but only have a few hours, and don’t have the time to travel.

Even though I have an extreme dislike for winter, the amazing things it does to the ground, like frost heaves and moisture, have a way of moving things around, and sometimes re-seed an area with some pretty cool stuff. I was hoping that happened here too, but I didn’t really care if I found anything or not, because I was finally off the couch, and doing what I love to do.

Luckily, for me, it appeared that Winter had left its mark on the area.  I found a small flat button right away, so already my day was made.

I decided to concentrate on the button area, which I had gridded the heck out of a few months earlier, so I was really surprised when I got this 12/46 reading on my E-trac, a typical silver or clad quarter reading for my machine.  I knew it wasn’t a clad quarter though, because 1.) The soil in this area is tricky, so things don’t always ring up normal (i.e. red dirt), and 2.) I don’t care what people say, if you’ve been using your machine long enough, you can just tell the difference.

I dug a larger plug than usual to make sure I didn’t scratch whatever it was with my shovel (past experience), and after fiddling around with the pinpointer and going a few inches deeper-ta da–Large Cent–Awesome!!! (That was for you JW). It was covered with a thick layer of dirt, and I thought it must have a lot of detail, because even without my glasses, I could make out the bust and wreath.  Happy, I popped it in my pouch, and hoped it would clean up better than the other coins I’ve found in this red clay.

A few minutes later, I got another decent signal, but only a few inches down.  I thought it might be a clad penny, but like I said, I never know here, this soil is tricky.  I quickly dug the target, which turned out to be a wheat penny.  Still better than a modern one.

Button, large cent & wheat penny, all in an area which was absolutely dead to signals a few months before.  I wished I had the time to re-grid, but I could tell the sun would be setting soon…

I did the best I could with my limited time.  I got another good signal, which was very deep, mixed in with a lot of shells, and appears to be what was left of a clock.  Shells are a very good sign, so I made a mental note to return there when I had more time.

I got a little tired of hunting that area, so I moved on, and a while later dug a nice Indian Head, (my favorite coin).  Then a Bicentennial quarter.  This was turning out to be an okay hunt.

I spent some time trying to get in areas I couldn’t get into during the summer because they were really overgrown, but I found they were overgrown with briars, which, by the way, do not discriminate, they still stick and scratch you no matter what time of year it is.

It started to get colder, and for most that’s not a big deal, but for me and my cranky thyroid, anything below 40 degrees registers at about 5 below on my thermostat.  So I decided to make my way back home, happy to have finally gotten some detecting in.

As I followed the path home, I was randomly swinging my machine and I got another high tone.  I thought for sure it was a junk because it’s a pretty littered area, but nope, it was a buckle.  Another cool find, and a great way to end the day.

I can’t believe I’m really contemplating these things, because I’d rather attend this dinner looking half as good as I could, with my guy dressed in plaid pants and a yellow and pink striped shirt than miss detecting on a nice day in the middle of winter to prep for an event–a gal has to have her priorities.

Tales of the Hunt

Comments (14) on “Detecting and Winter”