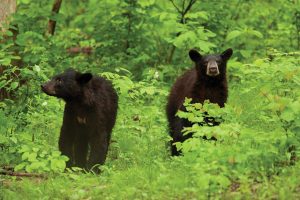 After a decade of trapsing around in the woods of New England, I finally saw my first Bear(s).  I was hunting a spot up in Kent, CT with my friend Kevin D.  Kevin went to go hunt down in the meadow, and I decided not to because it was too sunny.  When he came back to the top of the meadow, we were talking, and he suddenly says  “Hey, whats that? Is that a bear?” I looked down into the meadow, and sure enough it was a bear, not only that, but about 5 seconds later, another bear climbed down from a small tree right next to it.   Kevin had just been detecting the area minutes before that.  I don’t know that they would have bothered him, but still a little scary to see a bear (or two) at any time.  They weren’t cubs, but they were young.

We decided it was best to move on, but Kevin was so nice to point out that he did not have to run faster than the bears, just faster than me–thanks Kev.

Received the below email from Danny in The Netherlands, seems like he’s legit, so if you’ve got a patch you don’t need or want, why not send it to him?

I am searching for metal detector patches from clubs and detector brands, I hope to win a new patch for my collection that I save worldwide. more info see also my metal detector patches website https://info562135.wixsite.com/metaldetectingpatch tips or my website recording or sharing would help enormously. thanks in advance regards, Danny van de Pol Hertenlaantje 3 3766 AA Soest The Netherlands

I need help.  I’m trying to purchase a metal detector for my 4 year old granddaughter who loves “treasure hunting”, but is very small for her age. I’m having difficulty finding one that would be light enough for her to carry around, and also fit her height (37″).

I would also like the machine to be decent enough performance wise to keep her from getting frustrated and losing interest.

I am totally willing to cut the shaft to fit her height if necessary.  If anyone has any ideas, please leave a comment and let me know, or email me @ detectorista@gmail.com.  Thank you.

The Silver City Treasure Seekers are having a Treasure show, Saturday, September 15th, 2018 at the Holiday Inn in Taunton, MA. 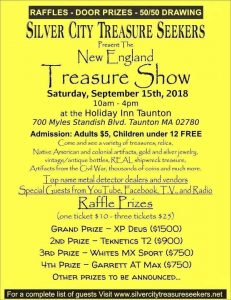 So I went to this site in Sherman, CT , and after being approached by some random guy who told me I couldn’t park in the  -parking area especially designated for this place –because it was wetlands, and claimed the town of Sherman was perpetuating a 30 year lie by telling people they could park there, I waited until he left, then carried on.  But… all I found was this drone.  It’s free to whoever wants to pay for shipping!

So my buddy JoJo and I were in northern CT, on an old dirt road that was supposed to lead us to a great detecting venue.  After a very scary downhill bumpy drive in my super low to the ground Subaru, we finally hit a nice flat area.  We were just discussing that we should probably take this flat alternate route out of there, when wouldn’t you know, we came upon a friggin’ tree across the road.  We couldn’t move it, because although the trunk wasn’t very thick, it was extremely long, and one end of it was still half attached to the stump. 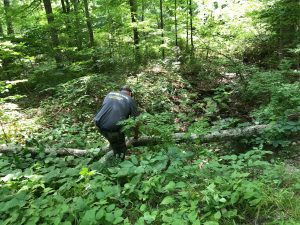 I talked JoJo into giving it a go with his machete, but it was no match for the tree.

We ended up going to a nearby deserted Girl Scout Camp, where we scooped up a few GS medals and some silver, but my best find of the day was this little mushroom.