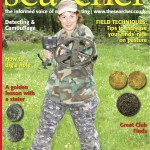 I am not a habitual reader of the Portable Antiquity blog, because basically I think it is BS, so I wouldn’t have seen the lovely write up by Paul Barford about my photo on the recent cover of The Searcher Magazine if my pal Dick Stout didn’t bring it to my attention.  You can read Barfords comments here.

My first response was to laugh really friggin’ hard.  My second response was to comment on Barfords blog–He’s very selective in his approvals, so in case its not approved,  here was my response:

“If you bothered to read, you would know the picture was submitted as a joke, and intended to look silly.
As for the pasture…haven’t seen a pasture in Connecticut since…um…never.
The photo was taken in my friends back yard, which the landscapers were late in mowing, but it proved to be a nice backdrop.”

Next, I responded to Dick:

As amusing as it is, I have to wonder– is Barford bored or what???

Comments (22) on “I am Officially Scandalous!”