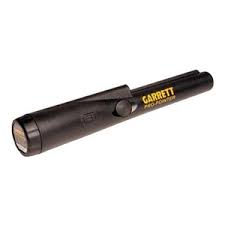 When I started detecting, I didn’t use a pinpointer. I don’t know or remember how I managed to find my targets without one, but I do recall the feeling of frustration.

My Dad, being a detectorist himself, graciously gave me a
White’s Bullseye as a gift. I was excited to try it out, and after a few hours with it, I decided pinpointers were the greatest invention of all time. My biggest fear in life suddenly became the fear of my pinpointer becoming lost or broken.

My unusual attachment to my Garrett Pro-pointer began when I received it as a late, but thoughtful gift from some guy who had forgotten Valentines Day. In his defense, Valentine’s Day did fall on “Detecting Day”, but c’mon, how obsessed do you have to be to forget Valentine’s Day?

Being female, I don’t have the upper arm strength of my male counterparts, so I’ve sometimes abandoned a partially dug hole because the target was too deep. My old pinpointer didn’t pinpoint as deeply as my Garrett, and just wasn’t picking up what my machine was telling me was there. I would become tired and frustrated and move on. However, the Garrett is so accurate in telling me something is there, just a few inches deeper, that it makes me want to give that extra effort and energy to find that target. On the flip side, it also lets me know when to walk away ‘cause if my Garrett isn’t picking it up after a bit, it’s probably too much effort, or too deep for me to retrieve it anyway.

The Whites Bullseye is still a good pinpointer, and I keep it as a back up. But for a woman in the field, who is limited by arm strength, I feel the Garrett Pro-pointer is the better choice. Whichever pinpointer you choose though, male or female, having one is key.

Comments (12) on “My Unusual Attachment to my Garrett Pro-Pointer”