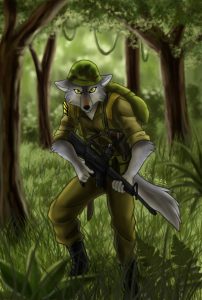 I took my friend JoJo to Roxbury, CT to hunt what I’ve dubbed the button site. So named because I had dug 14 buttons there, along with a CT Copper, pewter spoon and other colonial miscellany the week before.

It’s a really cool site, and I had only hit a small part of it. There are acres of old farmland, now wooded, with rock walls everywhere, and after hitting this spot, I was anxious to explore more of the area, either then or at a later date.

After about an hour, I was on button number 4, and just pulled out a nice buckle, when JoJo walked up to me, and with a hushed voice said “I don’t want to alarm you, but there is a guy across the river, with a gun…and he’s wearing a mask.” I got a little scared, and immediately said “Maybe we should leave.”

JoJo was staring hard across the river, and I said “Are you sure you weren’t seeing things?” He was very serious and quietly related how the first time he saw the guy he thought he was just seeing things, but then when he looked again, the guy was definitely there, holding a rifle, and with a Halloween type wolf mask, and when he saw JoJo looking at him, he ducked behind a tree.

I again said “We should leave”, and we quickly proceeded to do just that. Back on the trail, I told JoJo how earlier I had heard a strange low roar type sound, and had thought it was him, or my imagination and ignored it, but now I was thinking maybe it was this person messing with us.

I was a bit freaked out, because I had been hunting that area alone for hours the week before, and wondered if perhaps I had been unknowingly watched by this strange person. I’ve been spooked in the woods before, and left a site just based on a feeling, not even actually having seen or heard something.

There was actually someone there, and with a gun. Now maybe it was just some random hunter, who liked to really get into the role by masquerading as a wolf—there are a lot of weird people around, so you never know. Or maybe Jojo’s eyes were playing tricks on him, but I doubt it. I’ve known him for a long time, probably been out in the woods with him a hundred times, and nothing like this has ever occurred. His eyesight is sharp, and his concern was real, and even though I didn’t see this person myself, I believe that what he saw was not in his imagination.

The sucky part to all this, is that it was an awesome site that I don’t want to go back to now, and especially not alone.