It’s been a cold winter, and I don’t think I need to rehash my feelings about cold weather, but for a while, I was pretty miserable waiting for the thaw. I know a lot of you feel the same way, and then there are those of you that have that the weather ain’t gonna keep me from hunting attitude, and the only response I can offer you is “No, the frostbite didn’t disfigure you at all, you look fantastic—that Barber dime you found was definitely worth it”.

Anyway, now that somewhat warmer weather is on the horizon, it looks like 2018 is going to be a great hunting season. My calendar for April has 5 hunts scheduled, including the Best O’ the Northeast (BONE) hunt in New Hampshire next week (awesome), with May and June filling up quickly as well.

I’m bringing this up because I’ve just updated the Hunts & Events section again, and as soon as I got it updated, there was another list of events to add. I don’t think I’ve ever had so many hunts listed for a season. That tells me that the detecting community is going to be pretty busy over the next few months, so keep that in mind, and check back to see what’s going on.

I took my granddaughter Jordan on her first treasure hunt the other day. I knew she had a fascination with coins, but thought she might be too young (almost 4 years old) to enjoy detecting. Well, I guess if you asked her if she wanted to go detecting, she might not have understood and declined, but I didn’t say I was going detecting, I said I was going treasure hunting. Suddenly her eyes lit up, and she said excitedly “I want to go Treasure Hunting!”
Well, that was all I needed to hear, and her Mom thought it was a great idea, so thus began our first detecting adventure together…

We didn’t map out any cellar holes, or do any in depth research, rather we went to her backyard. The treasure we were looking for was clad, and I figured we’d at least find some of that there. My granddaughter has a fascination for coins, she doesn’t care how old they are. 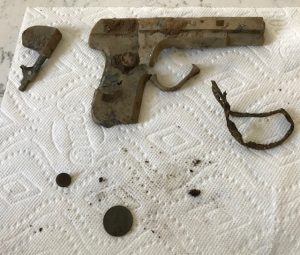 Our first target was a nail, I was disappointed for her, and told her “That is not treasure!”, but she was happy to find  something nonetheless. Our next target was a clad quarter, and I watched her face light up as she excitedly exclaimed “Oma we found treasure!” My heart melted, and I replied “Yes, that is definitely treasure”. I cannot even describe the cuteness of that moment.

We moved on and found a small flat button. This time, it was I who was very excited about the find, but she was kind of “meh”.  I told her it was very old, that’s what made it treasure, but I could tell she was not impressed.

Next we got very loud signal, and Jordan exclaimed “Oma, dig it, it’s treasure!”  I was sure hoping it was, so I dug, and dug, and finally…. a toy gun!  It came out in a few pieces, but we didn’t care, we were happy just finding it. 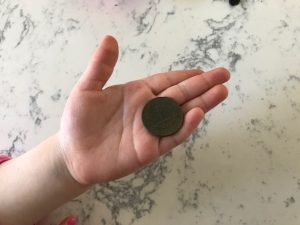 Our hunt came to an end shortly thereafter, because (treasure or not), little ones attention spans don’t last very long.  The memory, I’m sure will last though, and I think the proof of that is her carrying that dirty looking quarter around and telling everyone she found it “metal detecting!“–too cute.  Happy Hunting!