This years 24th Annual Best of the Northeast (BONE) Hunt, held the last week of April in New Hampshire reminded me of one of those TV reality shows where they throw a bunch of strangers in a house together, start filming, and see what happens…

Ah, well, there was no drama, sorry to disappoint you, and we didn’t get any of it on video, but you’ll just have to take my word on it that throwing 4 women who love metal detecting in a house together for 5 days only adds up to fun, fun, fun!

Before I go any further, I’d like to say a big THANK YOU here to Laura K. from our club for her hospitality, and for opening up her beautiful vacation home in New Hampshire for us ladies.  Thank you Laura!

If you’ve never been to the Best of the Northeast hunt, it’s a yearly 5 day metal detecting hunt, put on by George Streeter of Streeters Electronics in Marlborough, NH.  Somehow George manages to secure property for this event–which I imagine is a tough task these days, and detectorists from all across the country show up to hunt, hang out with other detectorists, and hopefully find some really cool stuff.

Some of these folks have been attending this annual hunt for years, for others, it’s their first group hunt. And, like any other organized hunt, you never know what the property will produce—you just show up ready and hopeful, and if you’re passionate about the hobby, you don’t really care.  Most folks are just happy to hunt and share in the camaraderie of the event, and if they find great stuff it’s a bonus.  I thought the sites chosen for this year’s hunt were great, and whatever the skill level, or expectations, everyone I talked to was having a good time.

I drove up from CT early in the morning on the first day of the hunt,  making it with about 20 minutes to spare before the hunt started.  The weather was a bit dreary, overcast, and raining on and off, but at least it wasn’t snowing.

I said some quick hello’s, and was rewarded by a kiss on the cheek from George Streeter–I love that guy.  He’s a little cranky, a lot sarcastic, and always says what’s on his mind, (whether he should or not). But he’s also got a big heart, and a cool little schnauzer named “Diesel”, who is one of the cutest & most mellow schnauzers I’ve ever met (except for my own of course).

After that it was time to hunt.

The first two days of the hunt were on former Congressman Bass’s Farm.  From what I could gather, (and I might be wrong, but this is what I was told), there were a few different homes on the farm, owned by different family members, and they all agreed to open up the parcels for the hunt. 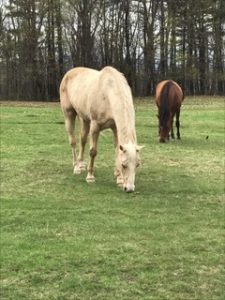 Most of us started out in the horse field.  The horses weren’t bothering with us, but I decided not to go near them, because  this was their home, and I was an outsider.  I also noticed our presence seemed to spook them a little, so I thought it better to be cautious.

Within a half hour, I got word that someone found a large cent in the field, and a few minutes later someone else popped out a George Washington Button.  What a great way to start the day—GW buttons are not found very often, so I expected a lot more would come out of the fields.

Myself, all I found in that field was a musketball, and I pretty much got out of there after the GW was found, because folks were making a B-line to that area, and I didn’t want to deal with the machine interference.

I went into the woods, which was quite overgrown, so I hunted my way into the back field, where I finally hit upon a nice little area that gave me a few keepers.  I ended the day with a large cent, buckle, suspender piece, and an odd looking pin that so far, no one has been able to identify.

I went back to the parking lot, and ran into Bill from Niagra Falls, NY.  He was proudly displaying the gold bracelet and silver spoon he found.  Silver and gold in the same day–kind of hard to top that!

As the day was coming to an end, folks slowly emerged from the woods and fields.  Most had a pouch full of goodies, and all appeared tired, but happy.

Us girls got a bite to eat, talked about metal detecting, of course, then headed back to the house for some well needed sleep.

Day two was again on the Bass Farm, and again the great finds kept coming.  We were allowed to hunt the lower section of the farm, in addition to the previous days area.  My first signal was a ring.  Not a gold or silver ring, just an old metal ring, but it was still a ring, so it was cool.  I heard a few folks yelling “Copper”, or “Flat Button”, so I knew there was still a lot of potential in the area.

Pat D. from the Nor’easters club passed by, saying he was heading over to hunt the stone wall.  I wished him luck, and my luck must be golden, because about 20 minutes later I overheard some guys talking about a 2 reale that someone had just found along the stone wall.  I just knew it was Pat, and I went to have a look.

After that, I came upon Jeff from Seattle, showing some of his finds.  This guy came all the way to the BONE hoping to find his first Coppers.  Luck was with him, and he scored some nice old coins at the old cellar hole on the farm which used to be a colonial tavern.  I thought it was so great that he traveled all that way, and didn’t get disappointed.  So congratulations to you Jeff–you certainly deserved it!

I decided I wanted to find another coin, so I had to get serious about it and began gridding a small field area near the cellar hole.  I was about half way through the field when I pulled out a copper.  I did a little happy dance in my mind for making that decision.  Sometimes you just have to grid it rather than just swinging around wherever it looks good.

I ran into Bill from Niagra Falls again, and after a quick trip to Dunkin’ for some much needed coffee (the donuts we didn’t need so much), we headed back to the far field to finish off the day.  As soon as I put my coil down, I got a good signal.  I was a bit surprised because I had seen dozens of people hunting the same area over the past two days, but hey, it was a good signal, so I dug.

I lifted up the plug, and smack in the center was a beautiful large cent.  Neither one of us could believe it.  It was a textbook target, and a great way to end the day.

On day three we hunted the Dublin Christian Academy.  Directions to the site were lacking, but I did finally make it there after asking a few folks where it was.

This was a site that had been hunted at a previous BONE hunt, but there was still stuff to be found if you wanted to walk a bit.  I met up once again with Bill from Niagra Falls, who I think will now forever be known as “Bill from Niagra Falls”.  We didn’t find much on the immediate school grounds, and no one else seemed to be finding much either, so we decided to hike it on up the hill way in the back of the school.

It was an unseasonably hot day, and I think most people opted for an easier spot to hunt, but we trudged on, and found an area ripe with targets.  It was on a pretty steep hill, and we figured it was so steep that no one bothered to hunt it in the past.

I ended up with a bent spoon, a buckle, 3 buttons, and a nice World War I horse rosette, but the sun was beating down on us, and that, combined with the heat, OMG we just had to get off that hill, so we headed back to the parking lot for some shade and some lunch.  “Bill from Niagra Falls” had to head on back to Niagra Falls, so I bid him safe journey–Thanks for all the laughs Bill.  It was great meeting you, and fun hunting with you-Hope to see you at next years hunt. 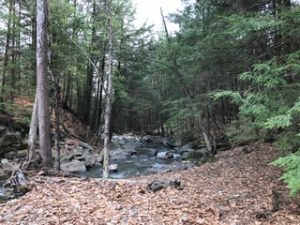 Day four was the Hobby show in Keene, NH.  Since there is no hunt scheduled on Hobby show day, us girls went out and hit a local swimming hole first.  It was a beautiful place, and I managed to find a Mercury dime and some wheat pennies, and then just before we left, I found the neatest old colonial button.  It was very large, fragile, made of pewter, and is now one of my favorite button finds.

Hunting over, it was time for the Hobby show.  I think they did a really nice job with the show.  They had talks, finds displays and raffles, as well as different manufacturers and retailers present.  I enjoyed myself, being especially interested in the XP Deus displayed at the MetalDetector.com booth.  I’ve been thinking lately that its about time to try something new…..

After the show we all got ready for the awards dinner. Every year Streeters and the Professional Treasure Hunters Historical Society nominate detectorists to the “Metal Detecting Hall of Fame” for a variety of reasons.  This year, myself, and Laura K. from our club the Yankee Territory Coinshooters, among others, received awards.  It was a nice dinner, with a great bunch of people, and all the nominees received a beautiful plaque.

Day 5 was the seeded hunt.  I believe 10 tokens for prizes (mostly metal detectors), along with a ton of old coins were buried in the field.  We hunted until all tokens were found, and once found and all prizes awarded, that was the end of BONE 24.

Of course, us girls weren’t done hunting yet.  We went to a local farm field where Sally (Laura’s sister) found her first large cent–woo hoo–then we went to some property Laura was familiar with, hunting until dark.

Sadly, the 5 day detecting bonanza came to an end and I had to head home, but once again, I had a great time George–thanks!

More pics from BONE 24 below: